Set a Word of the Year Instead?

There has been a recent trend online and on social media of people ditching New Year’s Resolutions. Is this a good thing? On the one hand it can bring off some of the pressure that we all feel on New Year’s Day, waking up and feeling like we need to become a whole new version of ourselves.

But can this pressure be healthy as well? If it’s something which is going to propel us forward to reaching our goals, wouldn’t a healthy dose of pressure be good?

When does this pressure become too much? 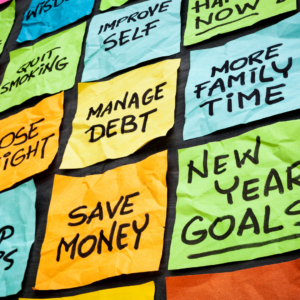 Some social media comments have been voicing the point that the pressure does not serve us, and that this pressure can be just another way to beat ourselves up later. Have you often hung onto things like a new year means a better body, and thinking that this would help you?

This is an amazing goal to have (and we can help you achieve it in a healthy and sustainable way), but some feel that it gives off the feeling that until you possess this ‘new body’, you are stuck.

Do you feel stuck on this New Years Resolution bandwagon, forced to conform to becoming a new and improved version of yourself every year, but left feeling empty when this doesn’t happen?

What if we delved a bit deeper into this rejection of New Year’s Resolutions.

Could it be that in this ‘age of anxiety’, as the 2010s, 2020s, have often been described as, that we are afraid of leaving our comfort zones? Could it be a fear of failing again? Or could it be just as many people of social media are saying – It’s another pressure that I don’t need in my life.

Do we need a new, updated and less ‘pressured’ way of setting New Years goals?

There are some new ways to start the year off in the positive light. One of these ways which is gaining in popularity is to set a ‘Word of the Year’. This is a word in which you can shape your life, your choices and your mindset around for that year. It’s seen as a positive way to re energize and refocus.

Instead of New Year’s Resolutions, which can be seen as negative and short term, a word of the year focuses on a long term, intentional focus.

A word of the year focuses on your holistic self – not just one or a few niggling things you yearn to change about yourself.

It’s all about self growth in every aspect of your life.

So, how do you choose your word of the year? @blessingmanifesting on Instagram has some good ideas. 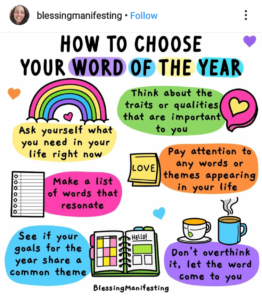 What word comes up for you?

So, what do you think? Is ditching the traditional style of New Year Resolutions and letting go of the pressure that surrounds it the right way forwards? Is creating a ‘word of the year’ a better and more positive way to start the year?

Or do you think there is a better option entirely!