Smoking or Vaping and the Subconscious MInd

Smoking or vaping? What is the difference and is one or the other more difficult to break the addiction? Or are they both equal? Your subconscious mind holds the key to help you quit smoking and/or vaping. Hypnotherapy can harness this power.

Cancers and overall health issues from inhaling toxic chemicals and inhaling smoke into the lungs, plus the addictive addition of nicotine, promote people to quit smoking. Not to mention the price for tobacco cigarettes is rising all the time. The average price is  $37.48 for 1 25 pack of smokes now. It not only makes medical sense to quit but economical sense as well.

So why do people switch to vaping?

Vaping, since the mid 2000s’ has fast become the updated ‘healthier’ and trending version of smoking, and the vaping market just keeps growing with retailers in store and online popping up and being created all the time.

So what is in a vaping device and what is the deal with vaping from an addictive point of view? Here is what the Centre On Addiction has to say:

*Note: we are discussing the propylene glycol or vegetable glycerin-based liquid vapes with nicotine, (not THC or synthetic drug vapes which some people use).

“Vaping is the act of inhaling and exhaling the aerosol, often referred to as vapor, which is produced by an e-cigarette or similar device. The term is used because e-cigarettes do not produce tobacco smoke, but rather an aerosol, often mistaken for water vapor, that actually consists of fine particles. Many of these particles contain varying amounts of toxic chemicals, which have been linked to cancer, as well as respiratory and heart disease.”

“e-liquid in vaporizer products usually contains a propylene glycol or vegetable glycerin-based liquid with nicotine, flavoring and other chemicals and metals, but not tobacco”

From a behavioural perspective, because vaping can very much be as much of  a social activity as smoking tobacco, and has been marketed and branded to be sold especially to young people as a more ‘healthy’ alternative; although it can be a way to help you stop smoking tobacco based traditional cigarettes, because it’s a social activity, the effect on the subconscious mind can be the same or similar.

E-cigarettes (or vapes) are meant to be a tool to help you quit smoking. Vaping may help some people quit, but it’s not harmless. It’s advised if you don’t already smoke, stay away from vaping.

At this stage the long term effects of burning the chemicals, etc. that go into vaping, are not known. And as yet no vaping device hasn been approved as an official stop-smoking medicine, but it seems it could be less harmful way of delivering nicotine than burning tobacco.

And when vapes come in such ‘delightful’ and ‘tantalizing’ flavours, it makes them more appealing as well:

Some have said smoking tobacco is like a “comforting friend”. So by this, vaping is a shiny and new comforting friend. Smoking is a psychological habit. There may be a part of the mind, the subconscious, that doesn’t want to “let go”.

Vaping can make it easier to quit smoking, but it still can be seen as a behavioural addiction and when friends, trends and the social and comforting aspect of it come in to it, vaping could have the same effect on the subconscious mind that tobacco smoking has, just without the tobacco.

And that is where hypnotherapy comes in. It can make it easier for you to stop smoking, plus it’s all natural – and you’re putting no harmful substances into your body at all.

Contact us for an all natural way to stop smoking.

Unleash the power of your subconscious mind. 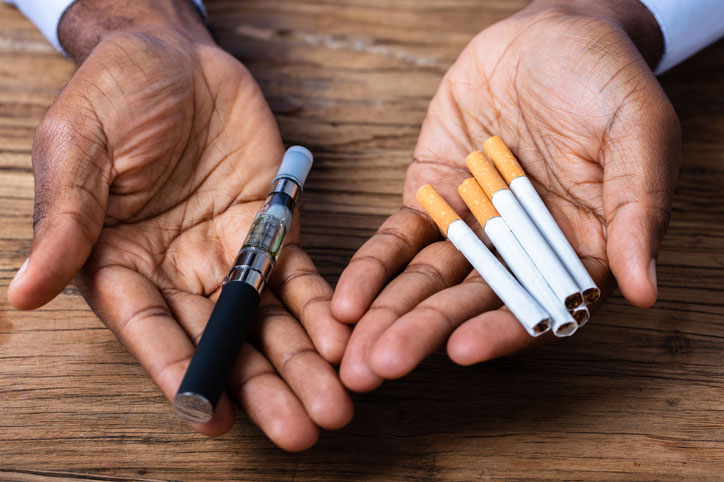